The highly anticipated PES 2022 PPSSPP ISO file is here. That’s said, am going to be providing the download link for the PES 2022 PSP football game. Also, the game has been highly compressed to a smaller size.

For most of you who love playing PES games with the PSP emulator on your android phones, you will really enjoy playing the newly released PES 22 game as it comes with a whole lot of nice and fascinating features. The PES 2022 comes as an upgrade to the PES 2021. The graphics of the game is excellent although it is loosely based on the PS2 graphics. But overall, the players look real and players have been transferred to their current clubs.

This post will provide you where to download PES 2022 PPSSPP ISO zip file on your android device, and how to unzip and play the game PES 22 game on your phone.

A Glance at some info about the PES 2022 PPSSPP game

The Pro Evolution Soccer 2022 mostly referred to as PES 22 is the latest installment in the PES series. The game comes with some major upgrades as compared to its later releases. Prominent teams like the likes of Chelsea, Real Madrid, Bayern Munich, Manchester United, Paris Saint Germain, Barcelona, Liverpool Manchester City, Juventus, Dortmund, etc all have their kits updated to the current season’s kits.

The PES 22 also has updated player transfer lists of players who were transferred from their current clubs to another during the transfer window. Stuffs like player appearance, jerseys, camera view, game data, etc, were also upgraded. The new upgrade also comes with better and working ad-hoc settings for the multiplayer mode.

New kinds of music were also added to the game for more gaming entertainment which is usually played during startup and game setup. The gameplay is superb with excellent and soft controls. Check out what the gameplay looks like below.

The eFootball PES 2022 comes with some stunning and excellent gameplay. Although the gameplay for the PES 22 isn’t quite different from the older versions it features a better visual appearance, slick controls, and amazing game scenes.

The games allows you to create a custom team and rally against the top elite teams. The pes 22 gives you full control of the game where you can make several adjustments or settings to meet your needs for the game.

The game features various game modes like the Exhibition, Master league, major European tournaments, leagues, and Adhoc multiplayer. Other continental cups and football tournaments are also included in the game.

In the exhibition mode, you can select your favorite or custom team and pit against any random team of your choice. Matches played in this mode are usually referred to as friendly games. Since it’s a friendly and also a means of testing your playing ability before embarking on competitive challenges. You can rest assured that you have nothing to lose irrespective of the results of the exhibition match.

Paramount European competitions like the UEFA Champions League, Europa League have all been included as you will battle and guide your team’s way to the top as Europe’s best club. Leagues like the English Premier League, Laliga, Bundesliga, Serie A, Ligue 1 are made available in the game with other sub-real-world leagues.

The PES 2022 also makes provision for Adhoc multiplayer mode. This feature allows you to play the game on multiplayer against your friends offline. Check below to see how to play PPSSPP multiplayer on android.

Features of the game

As a result of its rich features and upgrades, the PES 22 requires some basic conditions to be met to download and smoothly run the game. These requirements are outlined below.

Downloading the Pes 22 PSP iso file is now easy. The game has been tested and deemed to be working. the game’s link that’s provided here is the original Pes 2022 PPSSPP game with zero malware or virus.

Also, the game size has been highly compressed and you don’t have to use huge data to download the file. Although the game racks up a huge 1.4GB size. You can now download the game from the links provided below.

NB: The Pes 22 PSP game contains three files that you need to download in order to play the game which is the “PES 22 ISO, PES 2022 TEXTURE & PES 2022 SAVE DATA” with the trio coming in different sizes. Download Pes 2022 PPSSPP files below.

Check below to see how to install and run the PPSSPP 2022 game.

How to unzip and install the Pes 22 ISO file

When done downloading the above files, the next thing to do is to unzip the game. Most of our users who virtually visit our site should by now know how to unzip ISO files that come in zipped formats. But for those of you who are new here and don’t know how to unzip zip files, all you need to do is to follow the steps below carefully in order to run the game smoothly on your android device.

Before I begin with the steps, make sure you have downloaded either of the file manager listed above in the requirements. But for easy procedures, I will be using the ES file explorer app. So do well to download it so you can flow with me as I show you the steps.

The procedure used in extracting the pes 2022 ISO file is the same as the TEXTURES and SAVEDATA files. The slight difference there is that;

For more insight, you can check our guide on how to set up games with OBB & zip files on Android.

After successfully extracting the game, now open your PPSSPP app. Navigate to the PSP folder > Games where you extracted the Pes 22 game into, and then tap on the game to load and play it.

How to play multiplayer with the PES 2022 game

Most of you might be tired of playing the PES game with the computer all the time and would want to switch the game mode to multiplayer. Since most of you have friends you might want to challenge each other in the multiplayer mode.

Interestingly, the pes 2022 game comes with an improved Adhoc multiplayer mode where you can play multiplayer with anyone.

So to compete in this mode with your colleagues quickly read this guide from us on how to connect PPSSPP for multiplayer on Android.

Playing the pes 2022 is very easy when playing at the beginner or amateur levels. Levels like professional or top player could give you a serious challenge especially if you aren’t an experienced player or expert in playing PES games.

But then, you can build an invisible team and rise to the ranks as the strongest team in the league without much ado. All you need to do is just apply or use cheats on the game.

So if you chose to apply cheats on the PES 22 game, take time to check this post from us on how to use cheats in PPSSPP games.

The PES 2022 appears to be a game you should give a try as it comes with a whole lot of fresh features. The graphics and gameplay are close to perfect. When you play the game, you will tend to explore the full action.

For complaints patterning any broken link, do not hesitate to bring it to our notice by dropping a comment below. Also, if you are still finding it difficult to unzip the PES 22 game files or experiencing some glitches in the game, do well to also drop a review below for swift assistance.

That’s all for now on the PES 22 PPSSPP game. Other modifications for the game will follow immediately after they are done in the game.

Tue Apr 5 , 2022
Are you a lover of open-world games, and trying to get some of the best PSP open-world games to play on your android PPSSPP emulator? Then this post will provide you with the necessary info in that regard, alongside a download link for the ISO game files. Open world games […] 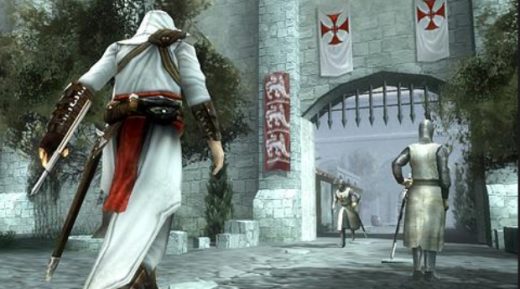