Late posts from this blog have covered lots of topics from several game genres like shooting games, action games, fighting games, horror games, open-world games, etc. However, today’s coverage will center on some of the most popular and best sniper games for iOS, which can be played on iPhone or iPad devices.

Sniper games require great tactics and patience – where the player is to focus and stealthily shoot enemies from a remote point. Usually a vantage point. On game parity, Google’s gaming store supports a higher number than Apple’s store. That’s why getting some popular games for the system could be challenging.

Notwithstanding, I have gathered some of the best sniper games for iPhone and iPad that you can play for free. Interestingly, I also provided a download link where you can quickly and directly get these games from the Apple store.

Below you will find the most popular and highly rated sniper games for the iPhone device.

Developed by Square Enix Montreal and published by Square Enix for Android and iOS platforms, Hitman Sniper is one of the best shooting games you can play on your iOS devices. The game focuses on the main character Agent 47, who is a contract killer, hired to kill several high-profile targets and enemies in the city.

From a vantage point, the player takes a better view of the environment while he looks through his sniper scope vision to locate enemy targets. High-profile targets to be assassinated in the game are usually protected by guards or thugs. An alert is triggered when the guards detect any damage or kill in the game. Even though they can’t attack you, the notice will cause the target to quickly depart the area which will result in a failed mission.

The player unlocks new and powerful weapons as he advances in the game. The game also has a zombie survival mode where you will have to protect a survivor fixing his truck from incoming zombies. Zombies come in different waves. Subsequent waves see the zombies being tough and large. A zombie boss is also available at the end of each zombie survival mission.

Want to give it a try? Download Hitman Sniper below from the Apple store.

Sniper Strike is a 3D first-person shooter game that includes a PvP. it was developed by MGS Mobile Gaming and published by Eight Pixels Square in 2017. The game locks you in a fixed position throughout the entire campaign mode.

The mission design is to intercept, eliminate and extract. Where you are tasked to wipe out elite commanders and their henchmen with satisfying kill shots. You will team up with Wolf, Jackson, and other strike forces to cleanse hostile activities in the area.

The game’s Player vs Player (PvP) option allows you to connect with other online counterparts and show off your best sniping skills in live sniper duels. Not just for Android and Microsoft Windows, Sniper Strike is also available for iOS! You can either play the game on your iPad or iPhone. Get the game below.

Another great 3D sniper game for iOS in this list is Sniper 3D. It is an online & offline multiplayer FPS shooter game where you shoot like a sniper assassin. You are to infiltrate the enemy zone – taking down every bad element. Sniper 3D comes with 6 game modes – Sniper Story Campaign, Compete in the Arena, Shooting Range Challenge, Squad Wars, Zombie Nightmare, and Events. Each with its own objective design.

The online multiplayer mode pits you with other players as you rise to the ranks as the best sniper assassin. More than 150 sniper rifles and other weapons are provided in the game. The controls are intuitive with ultra-realistic 3D graphics. The game is one of the best offline sniper games for iPhone.

Begin your adventure in this highly rated sniper FPS for mobile.

Modern Sniper Assassin Ultimate 3D was one of the best 2017 sniper shooting games for the iOS platform. The game provides modern latest sniper 3d weapons that you will use on enemies. With realistic 3D graphics and real battlefield sound effects, you will certainly enjoy every bit of action in the game.

The player can battle against enemies in various environments like deserts, mountains, and cities.

This now gives you access to powerful weapons like sniper rifles, assault rifles, pistols, and bombs. More than 20 weapons are available to unlock and upgrade as well. The game’s cutscenes and realistic weapon sound and recoil also make the game fun and addictive to play

Rated 17+ in the Apple store, Lonewolf is not suitable for children!

Hitman Sniper: The Shadows is the sequel to the 2014 Hitman Sniper. The Shadows sees the disappearance of the iconic game series protagonist, Agent 47. This time you will enter into a team of highly skilled snipers known as The Shadows.

The gameplay follows similar mechanics to Hitman Sniper. You are to embark on globetrotting assignments – eliminating targets in turn for reward and also build your sniper reputation. Some new fascinating features of the game are the introduction of new maps, multiple vantage points, and also different times of the day.

Enjoy this sniper game for iPhone by downloading it below.

Cover Fire is one of the few free offline sniper shooting games for iOS. Not just for the single-player campaign mode, the game also has a zombie survival mode where you will battle for survival against bloodthirsty zombies.

The main objective of the game is to embark on infiltration missions and kill enemy targets in the terrorist base. Some missions will see you shooting from a vehicle or helicopter with a machine gun. The controls are easy to master coupled with realistic 3D graphics.

Intensify your Cover Fire sniper game career by downloading the game for your iPhone or iPad.

Sniper Fury is a Gameloft 2015 action-sharpshooting game. If you like playing online games, then you should try out Sniper Fury.

Involving a first-person shooter view, the player must engage in high-octane combat – killing hostile groups and leaders with his long-range sniper rifle. Sniper Fury offers over a thousand missions where you battle enemy groups in several locations and regions.

The game places you in a perfect vantage point where you get a clear picture of the environment, uncovering enemy hideouts. The PvP online multiplayer mode allows up to 10 people to face each other in an insane sniping battle. The latest survivor in the battle is crowned the winner.

Enjoy the thrilling multiplayer sniping action by getting the game.

Just as the name implies, you are a sniper assassin, hired to eliminate several high-profile targets. While the city is under siege from Cyborgs and Mechanized Combat Units, another hostile group is abducting scientists for use in developing nanocrystal technology. As a master assassin, your expertise is needed to counterattack the enemy offensive.

The game has about 250 missions, each with its objectives. As you progress, enemies become tough and powerful. Weapon upgrades are also available.

During the online PvP mode, you can attack other players’ bases and resources while you rally your way to the top as the #1 PvP assassin.

The last sniper game for today’s coverage is Sniper Arena: PvP Army Shooter. Just like Contract Killer: Sniper, the game is an online shooter game. The game features three campaign modes: Deathmatch, Team Deathmatch, and Domination with unique goals. You are to infiltrate enemy hideouts and make sure no enemy is left as a survivor.

The game is fun and addictive to play with super sniper rifles, intuitive controls, and 3D realistic graphics. Playing the game requires a steady internet connection so make sure everything is set on that before launching the game.

Final thoughts on the best Sniper games for iOS

The games provided here are some of the few popular, fun, and addictive to play sniper games for iOS. You now have the option to download the one you prefer and play it on your iPhone or iPad.. Have any suggestions to make on this? Let’s hear from you in the comments section and don’t forget to share and join us on Telegram

What are the 5 Free OCR Tools for Image to Text Conversion in 2022?

Tue Apr 19 , 2022
Optical Character Recognition (OCR) has become so popular because it used to be the domain of expensive software. But now, it is available for free in a much simpler form. So, in this (5 free OCR tools for image to text conversion in 2022) guide, I will share the five […] 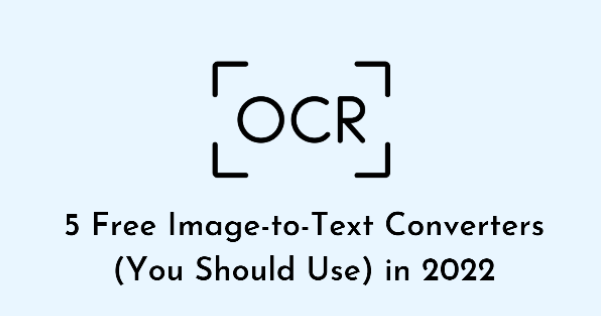